Good for the Tummy and Teeth!

Hay -- those grassy stalks that we lovingly nestle into our chinchilla's cute ceramic hay holders or wooden slat hay racks, or perhaps place in a neat pile next to their food dish... we know how it always ends up -- inspected one-by-one with the rejected pieces strewn all over the cage to be urinated on... but as much as it seems our chins sometimes waste their hay, the pieces that pass the test and get eaten are extremely beneficial to a chinchilla's health! 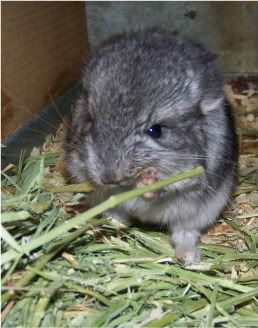 Hay should actually be considered the staple of a chinchilla's diet. Yes, it's that important! Chinchillas are herbivores and their digestive tract is designed to process a diet very high in fiber. They have a large pouch in their intestines called a cecum which contains colonies of "good bacteria" whose job is to break down plant-based food items and extract nutrients from it. As chinchillas are native to a cool, dry region in South America (think: a dry, rocky desert atmosphere but at a cool, high elevation), their digestive system is meant to handle a diet that is mostly grasses and fibrous plants. In fact - feeding them foods which are nutrient-rich or sugary often ends up disrupting their gut balance and can lead to bloat or diarrhea; this is why fruits and veggies are not good foods for chinchillas. Chinchilla pellets are made up largely of alfalfa hay and are fortified with vitamins, but lots of loose hay should be provided to your chin as well to give them the fiber bulk they need to be moving through their gut for a healthy digestive tract. 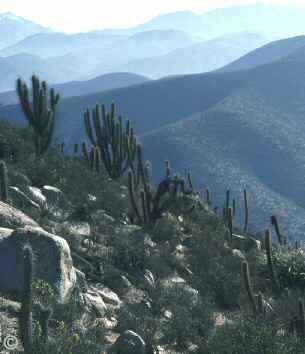 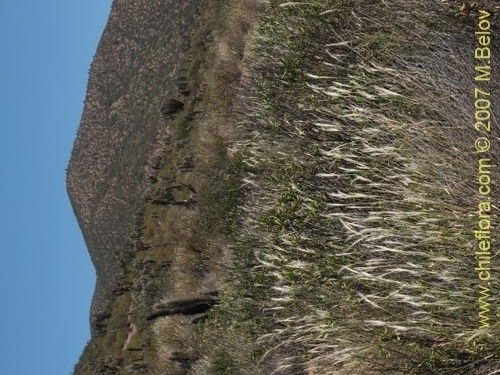 Other than the fiber source that loose hay provides, hay also contains silicates which provide the roughness needed to help file down the cheek teeth (premolars and molars) of a chinchilla. Chinchillas are rodents so their teeth will grow continuously throughout their lifetime. Gnawing on hard surfaces like wood and pumice helps to wear down their incisors (front teeth) but having a diet with lots of loose hay helps to wear down those back teeth. Pellets are combined with other ingredients such as grains and vitamins, processed, and extruded into a pellet form, so they tend to crumble when chewed - while nutritious, pellets alone aren't the best for maintaining healthy teeth. Chinchilla teeth are unique in that they're open-rooted; without adequate wear of the surfaces of the teeth, the chewing surfaces may become misaligned (malocclusion) and the roots will begin to elongate. Overgrown roots can eventually protrude into the sinus cavities and eye sockets on the top and into the jaw bone on the bottom - this is why one of the telltale signs of dental problems is wet eyes, and/or drooling. It is a painful condition and while there is a genetic predisposition to it, diet is one of the factors contributing to if or how quickly "malo" develops. 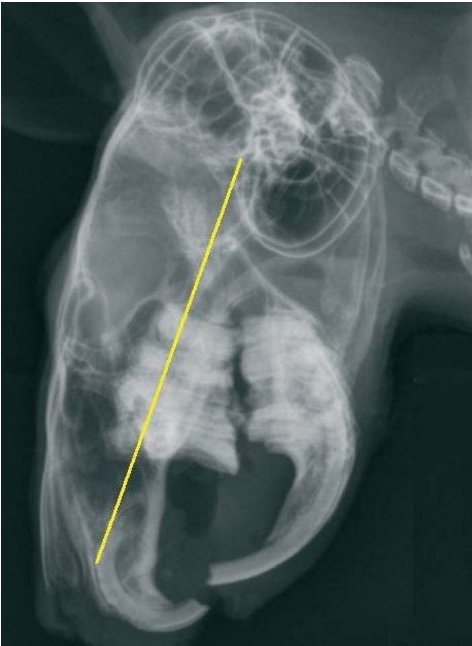 Radiograph of a chinchilla skull with the yellow line showing the above limit for maxillary teeth apices. - Photo by Kathleen Herman

So What Hay Should I Feed?

The staple hay for a chinchilla should be a loose grass hay, such as Timothy or Orchard. Grass hays have the correct ratio of the minerals, calcium and phosphorous, so these hays can be given daily and in abundance. While some chins are great hay eaters and will eat their hay daily, some can be picky and getting them to eat hay can be a challenge. Soiled hay must be thrown away and replaced daily so it can be frustrating to have wasteful chinchillas. The one good thing is that the hay does provide them with some enrichment, even if they're just tossing it around... but we do need them to consume the hay for its dental and nutritional benefits. 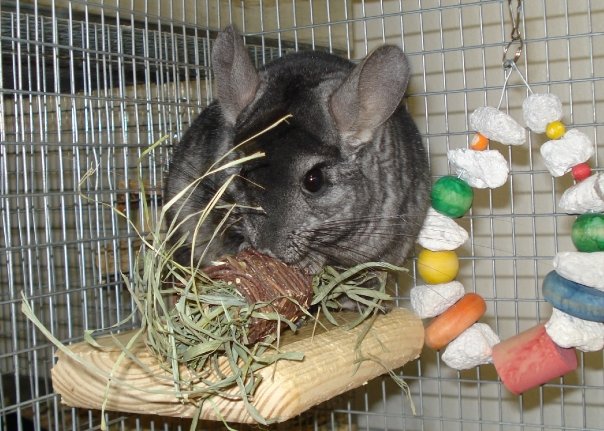 Old, overly dried-out hay won't be appetizing for a chinchilla but wet, moldy, or improperly stored hay isn't safe either. Use your senses to determine the quality of the hay.

Look at it - The color does not necessarily need to be bright green as the sun often bleaches the color during drying. Just take a look at the hay that isn't on the outside of the bale or package and ensure that there are no hidden discolorations, clumps, random items, weeds, or black spots indicating mold growth. Once you take it home, make sure it's stored properly in a breathable bag or container. I don't like plastic bags for storing hay because condensation can build up and result in mold growth - paper bags, cardboard boxes, or big canvas horse bale bags (if you buy in bulk!) are my favorite storage methods.

Smell it - it should smell slightly fragrant, not musty or sour.

Touch it - Bend and twist a small handful of hay - you should be able to break the stalks and leaves apart but it shouldn't be so brittle that it immediately snaps upon bending or disintegrates to dust upon touch. On the other hand, it shouldn't be so moist that it is flexible either - damp hay isn't properly cured and is more likely to mold. 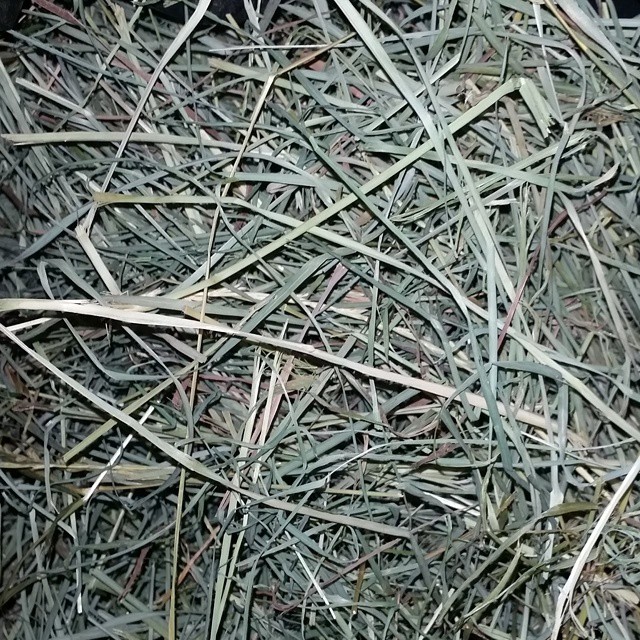 Switch up the Flavors!

While you want to give your staple hay (orchard or timothy) on a regular basis, adding in other hay varieties on occasion can entice your chin to eat more. Here are some hays which are good as the occasional mix-in:

Brome, bluegrass, and meadow hay - these are all grass hays and a nice handful can be given with their timothy hay. Each of these varieties have different flavors and textures than timothy and can help keep your chin interested in their hay.

Alfalfa - this is a legume hay which means it is higher in protein and calcium. It is especially good for young growing chins or pregnant/nursing moms but it is also a nice fragrant treat hay. Alfalfa should not be given daily in large portions to non-breeding adult chins. I consider it a treat hay for non-breeding adults as it is quite rich and can cause loose stools in chins that don't have high protein and mineral requirements.

Oat or barley hay - these are grain hays which tend to be higher in carbohydrates and higher in phosphorous than calcium. Grain hays should not be the staple hay; however, they tend to be thicker-stemmed and more "crunchy," so they are really good abrasive hays for helping to maintain dental health. A small amount as an occasional treat hay can provide nice variety for your chin.

It's only natural to become bored with the same thing all the time. Another way to give your chin variety in the firmness and texture of their hay is by purchasing different cuts!

3rd cutting - a leafier and softer hay, more flavorful for picky eaters but lower in fiber and less abrasive 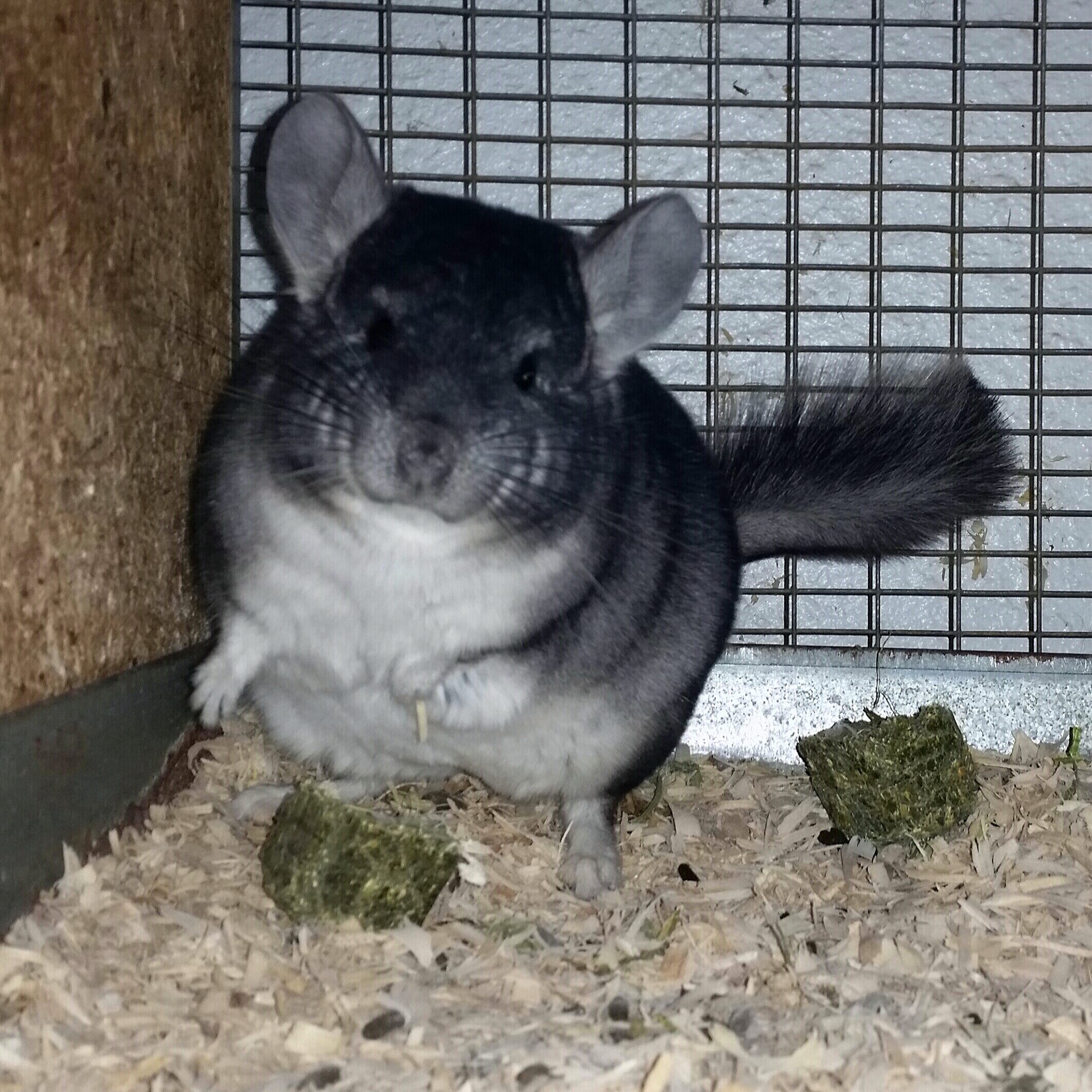 Loose - loose hay is what I recommend giving on a daily basis. The long-strand hay provides the most fiber and is best for wearing down those teeth. However, some people have allergies to certain types of hay and loose hay can sometimes trigger allergies when handling it

Cubed - hay can be purchased compressed into cubes - these provide variety in the shape and are also quite hard, requiring chins to gnaw on it with their incisors. Alfalfa, timothy, oat, and blends of either of these are often available at pet stores and feed stores. The one pro of these is that they are less dusty and less allergenic. I developed allergies to timothy hay over the past few years and now give hay cubes more often than loose hay. However, it should not entirely replace loose hay as it doesn't do AS good a job at wearing the back teeth.

Hay can be purchased from your local pet store, online, or even a feed store. If purchasing an entire bale from a feed store, make sure to ask for horse-quality hay (which is higher quality than bales used for feeding cattle) and inspect the hay bale well.

One of my favorite hay vendors is Small Pet Select. Their hay is always great quality and they sell different cuttings as well as variety packs if you want to try out different types of hays. And if you have Amazon Prime, you can get it shipped to you in two days. 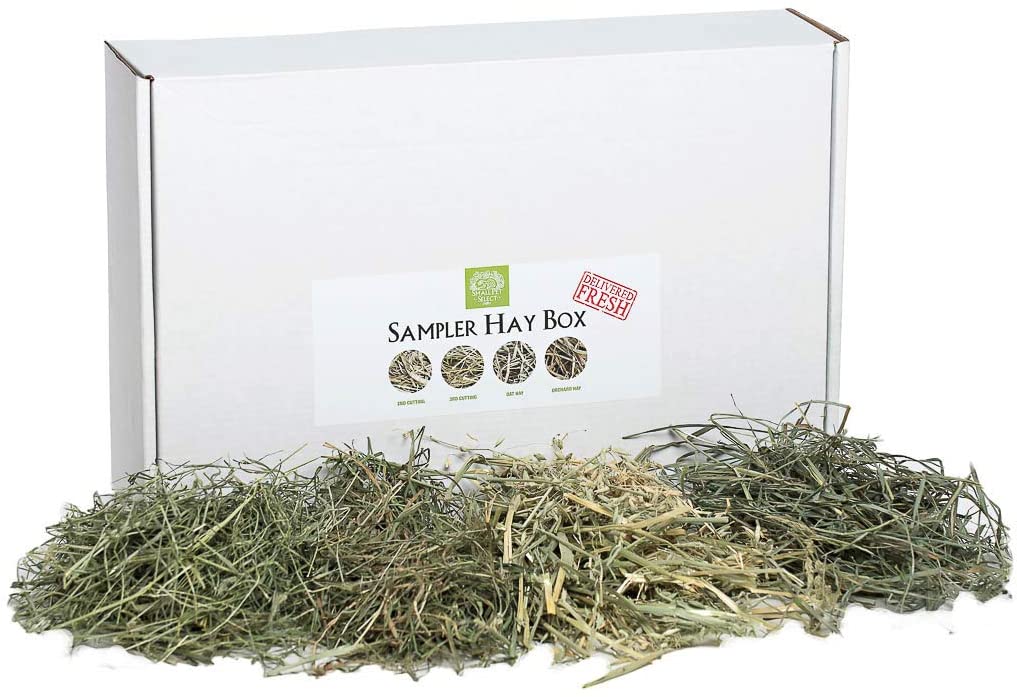 Some other brands of hay which I've tried and liked are Oxbow which has small packs of hays under $5 if you just want to try it out like botanical hay (makes a great treat with dried flowers mixed in) or oat hay. Another company, KMS Hayloft also has nice bulk boxes of hays and my chins especially like their bluegrass.

I hope you enjoyed this article on hay - I know this was a long post but I had so much good info to share with you all! Feel free to share with other chinchilla owners who might like to learn about the benefits of hay. Happy hay-ing!

Osofsky, A. & Verstraete, F. Dentistry in Pet Rodents. Compendium on Continuing Education for the Practicing Veterinarian. 2006. 28.